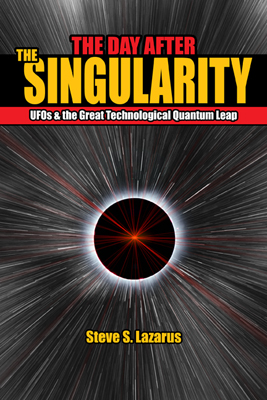 AGOURA HILLS, California – October 13, 2020 – After more than half a century of denial, the U. S. government has finally admitted that UFOs are real. In April, the Pentagon officially declassified three videos of real UFOs recently captured by Navy pilots. Full stop. You may have missed the news, and you’d be excused because the story hasn’t gotten much attention yet, but that won’t last long according to author Steve S. Lazarus.

“Technology is making UFO Disclosure inevitable. We see that with the three videos. The closer we get to the day that artificial intelligence surpasses human intelligence, the less deniable the truth about UFOs will be. Just a couple months ago Elon Musk said that day was less than five years out. So we’re in for a wild ride. UFOs and ETs are just the beginning. There’s so much more going on it’ll blow your mind,” said Lazarus, author of the new book The Day After the Singularity: UFOs & the Great Technological Quantum Leap.

A first-hand close encounter eyewitness and Disclosure advocate since 1997, Lazarus has expanded on the original Extraterrestrial hypothesis (ETH) with a new theory he calls Post-Singularity Extraterrestrial Transmigration hypothesis (PSETH), which posits that an extraterrestrial civilization that has successfully navigated the technological Singularity phase of its evolution has colonized the Galaxy.

Futurists like Google Director of Engineering Ray Kurzweil, who have ignored UFOs like the great majority of the scientific community, believe we are likely the first civilization to come this far and that we will colonize the Galaxy, but as Lazarus shows, not only are real UFOs extraterrestrial craft, the nonrandom alignment of pulsars that mark the Galaxy’s one radian point fulfills Kurzweil’s own prediction that there would be an artificial grouping of stars somewhere in the heavens if extraterrestrials had already achieved post-Singularity civilization.

So real UFOs are indeed extraterrestrial craft, but they’re not truly alien and they aren’t just visiting. Scientists assume that extraterrestrials will have evolved on some distant cosmic Galapagos island-like planet, completely cut-off from and unrelated to Earth. PSETH shows that assumption is wrong. Most, if not all, life in the Galaxy is the product of a distant extraterrestrial technological Singularity.

The Milky Way is occupied by this transcendent civilization, which is able to engineer on an astronomical level. It can move stars – like pulsars – around the Galaxy and place the Moon in precise orbit around the Earth to facilitate the evolution of life.

Lazarus contends that if we survive our own local Singularity, which is rapidly approaching, we’ll be part of that world and perhaps have an opportunity to continue the expansion process by creating a new world of our own somewhere out there in the heavens.

U.S. Air Force Project Blue Book astronomer J. Allen Hynek once said the solution to the UFO problem would bring about a monumental quantum leap for science. Seems he was onto something.