When the long-awaited solution to the UFO problem comes, I believe that it will prove to be not merely the next small step in the march of science, but a mighty and totally unexpected quantum leap.

THAT DAY IS HERE

THE PROOF IS IN THE STARS

Once a civilization develops computing it’s on the fast track to a transcendent evolutionary event called the technological Singularity. Computing power doubles roughly every two years, speeding us faster and faster towards a singular point in time when artificial intelligence exceeds human intelligence. Futurists tell us no one knows what life will be like after the Singularity, when humanity merges with its artificially intelligent devices, but they’re wrong.
UFO/ET eyewitnesses have seen and experienced this world, made possible by a wondrous and magical technology – the ultimate technology – that enables the engineering of reality itself. Futurists imagine we will be the first to achieve such god-like powers, but the day after the Singularity the unacknowledged will no longer be deniable and we will discover that we are part of this ‘post-Singularity’ civilization that occupies the Milky Way Galaxy. The proof is in the stars.
The nonrandom alignment of pulsars around mathematically significant points in the Galaxy fulfills Google Director of Engineering Ray Kurzweil’s prediction that an artificial grouping of stars would exist somewhere in the heavens if extraterrestrials had already been through the Singularity. 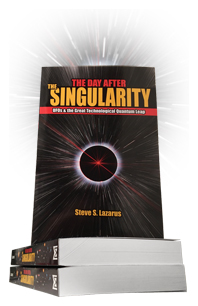 Like the original extraterrestrial hypothesis (ETH) before it, post-Singularity extraterrestrial transmigration hypothesis (PSETH) is the only hypothesis that resolves all the various aspects of the UFO phenomenon, as well as many Earth mysteries, like the origin of the Moon. Through the lens of PSETH, all the puzzle pieces fall into place.
PSETH explains why we have an extraterrestrial presence, not just visitors. It explains why they don’t invade and why they’re careful not to disrupt us or cause panic in our civilization. It explains why they interfere with our nuclear arsenal, both as a warning and in preparing to intervene should we be deranged enough to use them. It explains why it’s possible to have a reproductive and sexual component to alien contact and it explains why ETs would create an alien abduction /hybrid program as a back-up plan for Earth should we finally succeed in destroying ourselves.